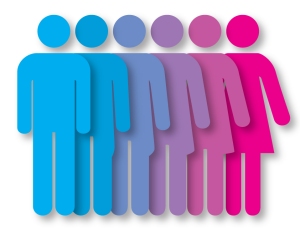 I am changing the title of this series, because I want to be able to include the perspectives of people who don’t necessarily identify as genderqueer. Lots of people struggle with and think deeply about gender, and I’m interested in highlighting the variety of experiences that people have with that in general, regardless of identity. Check out the rest of the series.

Today, I bring you:

A Boy and Her Dog writes about struggling to find a label that feels right, and that also communicates effectively to other people. (You might also just want to browse the archives of this one, for a lot more musings on gender).

I don’t want to be corralled into the polygon sliver within the overlapping circles of lesbian, butch, transgender, queer, neutrois, genderqueer, androgynous, agender, tomboy, and transmasculine. Nor do I want to define myself by the empty space left over after eliminating what I am not: cisgender, straight, polyamorous, bisexual, transsexual, trans man, or ftm. I would like to be able to explain myself in one sentence that anyone can understand and relate to.
…
When I tell someone I’m transgender, they may think that I just started to transition, or that I’m not very convincing. I don’t look “trans enough” to them.
…
When I tell someone I’m butch, they see a masculine woman who fits their stereotype of what a lesbian looks like. They see me as “butch enough.”

An amazing comic explaining agender identities – much of this is applicable to the broader non-binary umbrella. An excerpt summarizing the author’s personal gender journey:

Age 7 No idea what genders were
Age 10 Had a clue, Ghostbusters more important
Age 13 Tried the macho tihng, with a healthy dose of angst
Age 20 Tried to be more “girly,” Felt more uncomfortable than ever
Present Accepted that neither gender fit me

On the angst that come along with round-table pronoun announcements, a practice intended to make Trans* and gender-nonconforming folks more comfortable.

what seems to happen is that the [Preferred Gender Pronoun] Check will happen, and myself and the likely one or two other trans folks in the room will state what pronouns we prefer, and a few of the other people will state what pronouns they prefer. And then, without fail, about half of the cis people in the room say, “Oh, well, I prefer male/female pronouns, but really you can call me whatever you want.”

And so, time after time after time, what started as an attempt to make the space more trans friendly becomes another display of the cis privilege I will never have.

On being a woman with short hair.

I’ve experimented with growing the crop out twice, encouraged both times by men I was dating. It seemed like the thing to do to make myself more pleasing to potential boyfriends, potential bosses, and other people with potential power over my personal happiness. Both times, it looked awful. It took a lot of effort and a surprising amount of money to maintain, and it still looked awful, and I didn’t feel like myself.
…
And yet, the amount of male attention I got – from friendly flirting to unwanted hassle – increased enormously. Not because I looked better, but because I looked like I was trying to look more like a girl. Because I was performing femme. Every time I cut it off, I noticed immediately that the amount of street harassment I received, from cat-calls to whispered sexual slurs to gropes and grabs on public transport, dropped to a fraction of what it had been – apart from total strangers coming up to tell me how much prettier I’d be if I only grew it out.