Sometimes when I am working on a post idea, someone else I follow online will publish something that basically covers what I wanted to say about the topic. This happened a few weeks back with the Disrupting Dinner Parties post I reblogged, for instance. This usually causes me to discard whatever drafted thoughts or writing I have on the topic, unless there is an easy way to rework into a slightly different topic.

But I just realized a thing. You see, the thing about actually teaching people new concepts, about changing hearts and minds is that there is pretty much never a singular article someone reads that causes them to make a paradigm shift in their thinking. I know that coming round to understanding some of the aspects of feminist thought that just want against the grain of my pre-existing cognitive structures (things like, I am almost embarrassed to admit, why victim-blaming and teaching women how to avoid rape is a wrong-headed and ineffective way of preventing rape) involved reading many, many articles about those topics over a number of months.

There was no single definitive person or piece of writing who flipped that switch. The information, in the form of a number of slightly different wordings and perspectives on the issue just suddenly all coalesced one day, and began to carry enough weight to actually begin to shove aside my previous belief system.

And really this is actually how brains work. They like to filter out and discount information that doesn’t fit their existing worldview, whether or not we want them to. And new ideas really need to come up over and over again, in different places, before our brain will let us pay attention to that kind of information.

And so, you see, I have decided to stop discounting my own writing, my own particular take and approach on topics, simply because I recently saw someone speaking eloquently about that thing. Which is really just a long-winded way of saying probably you will see a post on here about labels, and why people who declare that they just don’t care about them are not helping.

Because what I have to say is just as important, and has just as much potential to change someone’s mind as anyone else’s writing. Because just having these ideas out there in as many forms as possible helps as reach more people. Because maybe one day social justice issues really will reach critical mass in the mainstream. Maybe. If we all keep saying things, and talking about it, and putting information and ideas out there.

Because we can, all of us, just help a little tiny bit in pushing a few people toward the important mental paradigm shifts that need to happen. So keep writing, everyone! 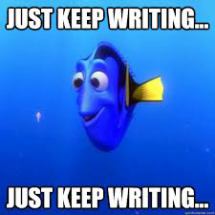