I recently read this article about how intent is not the be-all and end-all of whether you hurt someone through pronoun use, or other gendered language. It’s pretty great, and it made me think a lot about what people are really saying when they insist that misgendering someone is “just a mistake”.

Here’s my thing: I know that in most case when I am misgendered it is just a mistake. I have yet to experience someone deliberately and maliciously misgendering me, in fact. I’m pretty lucky that way, so far.

But I really feel like whenever I see a person insisting that their misgendering of someone else was just an honest mistake, or whatever, and not really apologizing or even fixing their mistake (and yes, the best practice when you realize you’ve just misgendered someone is to say “Sorry” and immediately repeat what you just said but with the correctly gendered language – it will make you do better next time), they are really saying one of two things:

Newsflash: no one gets to decide how big a deal a particular misgendering mistake is except for the person being misgendered. This very much relates back to my post about why you should avoid accusing people of “over-reacting” to things. You don’t know their reality, you don’t know what they deal with every day, and you don’t know what it feels like for them to be misgendered. So you can’t decide whether your mistake was “just a mistake” or whether it was a gigantic fuck-up that really hurt someone.

And I get that the instinctive response to being made aware of a hurtful mistake is often a certain amount of defensiveness, and that wanting absolution, wanting someone to confirm that it’s not big deal, is natural.

But here’s the thing. If you suck it up, accept that you done wrong and genuinely apologize and make amends, that is how it will cease to be a big deal. Minimizing another person’s hurt doesn’t make them hurt any less; in fact, often it involves asking that person to shoulder even more burden by absolving you of that hurt, leaving them with nowhere to turn.

Just, stop trying to tell other people what is and is not a big deal to them.

2. “I don’t really care that much, and I want your permission not to try.”

Sometimes people minimize their misgendering errors because they don’t really care, and they don’t want to do the work, and they are trying to get permission to not do the work. If the person they just misgendered agrees that it was just a mistake,and no big deal, then they can use that fact down the road when the continued misgendering becomes a much bigger problem. “But you said you understood that it was hard for me wah wah wah” etc. Seriously, stop making excuses and do the work. Apologize and fix it. And do better. Because you can, and we all know it. 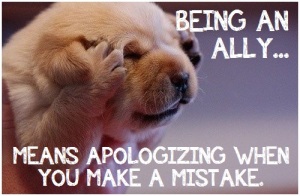 I mean, yes, I get that the most well-meaning person can slip up sometimes. The true test isn’t whether you are 100% perfect all the time with adjusting to new pronouns; the test is in how you deal with your mistakes. Own them; don’t minimize. Apologize for them. And fix them. It’s not that hard. And if you do those things you won’t find yourself seeking false absolution to feel better about yourself.

So, in conclusion, then?

Yes, I know it’s a mistake. Believe me, if I thought it was deliberate, we wouldn’t even be having this conversation; I would have left you far behind me a long time ago. That’s the issue at question.

The point is, it’s important. You are fucking up something important. It is a mistake; but it can and will never be “just” a mistake. So don’t try to get me or anyone else to absolve you of it. Fix it.