I think it’s fair to say than anyone who has ever tried to espouse and/or express any sort of social justice values has, at some point in their lives, been accused of over-reacting to something. It’s an extremely common silencing tactic, there’s no doubt about that. But I also realized something recently that adds just a touch of nuance to the way I think about accusations of “over-reaction”. I honestly think that there are instances where that kind of accusation can stem from a genuine misunderstanding.

I mean, there are certainly people out there (especially in internet-land) who will label any acknowledgement of racism or sexism (or any other -ism) as an over-reaction. Simply pointing out that something is problematic is considered going too far and being too sensitive as far as some folks are concerned. I like to call these people assholes, (for lack of a better term,) and don’t really feel the need to discuss them any further.

But I just don’t think that everyone who has ever accused someone of over-reaction deserves to be equated with those assholes. The realization I came to recently is that very often, when someone gets upset over some instance of marginalization, the people who lob accusations of over-reaction are simply misunderstanding what the person in question is, in fact, reacting to.

Because, honestly, I understand why responding with righteous rage to a (funny!) command that you make some dude a sandwich might appear to be an over-reaction. The problem, of course, is that the righteously enraged person is never responding to that one completely unfunny and tired joke, or single comment, or that isolated incident – they’re responding to a much larger pattern of marginalization, of which the joke or comment or incident in question is simply an illustrative example. And that example is the straw that has broken the camel’s back.

And this is the point that I want to make very clear, and in order to do so, I am going to seriously strain this analogy, and I apologize in advance. The thing is that when we discuss a straw breaking a camel’s back, we understand that the straw that does the breaking is not the first one, nor the second. In fact, understand that the camel must have been carrying a great deal of weight prior to the addition of that last piece of straw, and we would never accuse the poor creature of being flawed or weak for having been unable to take that last little bit of weight. We simply understand that its strength is finite, and it reached its limit.

But marginalized people never seem to get this kind of consideration. We are expected to simply keep absorbing the monthly, weekly, daily, and hourly instances of marginalization and bigotry in silence for ever. Why?

Because talking about prejudice is uncomfortable? More specifically, I expect, it’s because exposing prejudice is uncomfortable for the privileged folks in the room, while silently allowing prejudice to continue really only discomfits (disenfranchises) marginalized people. And really, marginalized people are used to this kind of thing, so they should totally be able t take, while it’s clearly unfair to expect racists who are accustomed to going unchallenged to suddenly be able take criticism, am I right?

Or am I just over-reacting?

But I digress: the real problem is that these patterns of social marginalization to which apparently over-reacting people are so often reacting are invisible to anyone who 1) is not directly affected by them; and 2) doesn’t explicitly try to look out for them (or, essentially, anyone who is in an acknowledged position of privilege). So, instead of seeing this: 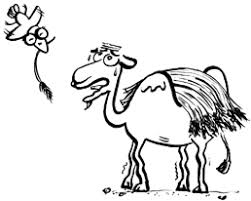 A person who has been blissfully ignorant of the pervasiveness of marginalizing messages in their culture (and is thus only aware of the incident in question) sees this:

And it is from this misunderstanding that many an accusation of over-reaction has stemmed.

Of course, it’s also important to note here that being marginalized in one aspect of one’s life (or alternatively, acknowledging one aspect of one’s privilege) does not always guarantee empathy with people who experience patterns of marginalization base don different characteristics; thus, LGB people accuse Trans* folks of over-reacting to their marginalization by LGB people, even while those same LGB folk are being accused of over-reacting to instances of heterosexism and anti-LGB bigotry.

And I’ve been just as guilty of this kind of thing as next person. But one of the most important lessons I’ve learned over the last few years is that if someone appears to be over-reacting to something, I probably lack the necessary context to properly assess their reaction. I probably don’t know actually understand what it is they’re actually reacting *to*. And remembering that one simple fact has helped me to learn so much, and become a better person. You should try it!